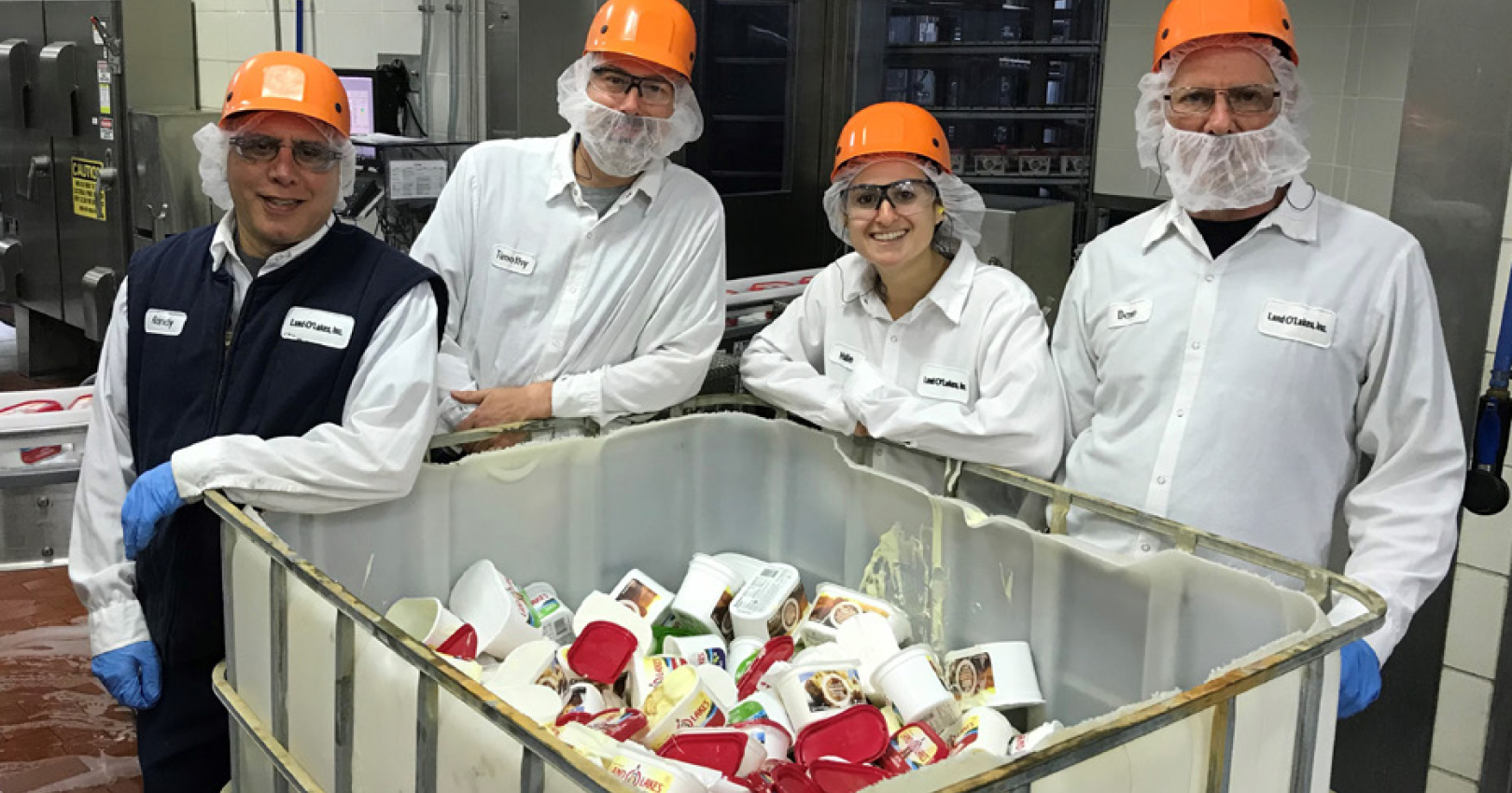 Here several team members stand around a line casualty bin that Covanta will later pick up, separate and process.

A Change for the Butter

Land O’Lakes, Inc. has been in operation for more than 95 years making everything from butter to milk to food for animals, doing business in all 50 states and in more than 60 countries. What began as a group of farmers coming together in Minnesota and Wisconsin to market and distribute members’ dairy products, grew into an organization with almost 4,000 members including dairy producers, agriculture producers and co-op members, plus more than 10,000 employees. With a mission to preserve and use land more effectively, Land O’Lakes has a distinguished reputation for being a good corporate citizen. But simply being good wasn’t good enough for Land O’Lakes. They wanted to do more.

This desire to do more was a key motivator for Josh Becking, EH&S Manager at the Land O’ Lakes Dairy Foods plant in Kent, Ohio, who recalls: “When I first joined Land O’Lakes in 2012, with the exception of cardboard, most all other waste from this facility was sent to the landfill.”

The Dairy Foods division is one of the most recognizable divisions of Land O’Lakes, producing cheese and butter in all forms from the pats used in restaurants, the stick or tubs sold in grocery stores and the large blocks used by the food industry.

Becking and his colleagues in Kent made some initial progress by recycling paper and plastics discarded in the facility’s breakrooms. However, to make the meaningful inroads necessary to further reduce waste, they knew they needed a sound and reliable collaborator.

“We first began working with Covanta because they had a solution to our line casualty challenges.”

For the past three years, the Kent, Ohio team has worked with Covanta to find ways to address the waste previously sent to landfill. “We first began working with Covanta because they had a solution to our line casualty challenges,” said Becking. “Like with every production line, there are some items that aren’t going to make it to store shelves. But we couldn’t find a place outside of the landfill to take these items because no one could separate the product from the package.” The line casualties are comprised of the plastic for the cup to hold the butter, the foil to cover the butter, and the butter itself which becomes grease as the product melts, making one butter pat potentially three different waste streams.

Undeterred by the multiple hard-to-recycle waste streams associated with one tiny product, Covanta’s solution was for the line casualties to be fed into a shredder for de-packaging. As a result, all of the components are now separated, including the butter and grease. Then the plastic and foil are recycled, and the butter and grease are sent to the anaerobic digester which produces energy (biogas). The biogas provides electricity for the processing facility and heat which is reused as part of the digestion process.

To ensure a simple process for Kent employees, Covanta provides several containers to the team on a weekly basis. The containers are placed strategically throughout the production floor where employees deposit the line casualties for later disposal. To avoid spillage or melting of cold products, the containers are stowed in cold storage until pick up. Each container holds approximately 1,000 pounds.

The Kent facility also generates solids (fats and fat by-products) from its wastewater pre-treatment facility which are picked up twice a week via tanker trucks supplied by Covanta and taken for processing.

“We even have Covanta on speed dial for emergencies,” added Becking. “For example, we send buttermilk to our facility in Pennsylvania. There was an issue at the plant and they were not able to accept our delivery. We called Covanta and those dairy contents were sent to the anaerobic digester, not the landfill.” The Kent team originally sought to divert five-to-seven percent of the facility’s waste from the landfill. “In the past few months we have reduced our waste to landfill by 20 percent,” said Becking.

“There is always more that can be done, but, we’re making progress. Covanta’s been right there with us.”

Change is never easy. Not all of the 167 people in the Kent facility were on board at first with the new waste management initiatives. “We’re asking employees to do extra work to sort and place waste differently,” said Hallie Davidson, Talent Acceleration Program associate.

“Hallie’s full-time job is to ensure that we meet our landfill reductions goals,” said Becking. “She is out on the floor every day asking employees what can be done so that we can get better–better at reaching our goals and also better at how we engage the employees in the waste reduction process. Hallie is the face and voice of the program. She helped create enthusiasm and support for the program.”

In 2017, the Kent facility was recognized by the Land O’Lakes, Inc. corporate team as the overall winner among its U.S. facilities in the pursuit of improved sustainability.

“It was amazing to have corporate recognize us and promote our work to facilities around the globe,” said Becking. “The recognition prompted many calls from other facilities to learn more about how we’ve been able to be successful.”

“There is always more that can be done,” added Davidson. “But, we’re making progress. Covanta’s been right there with us – helping, guiding and delivering on their promises to us.”