When asked why safety is important to him, Derek Sneade, a welder/mechanic at Covanta Bristol in Connecticut, is certain of his answer.

In April 2019, Derek was enjoying the day with his wife and their one-year-old daughter, Aubrey. At lunchtime, Derek’s wife cut up some fresh fruit for Aubrey who happily began eating. A short time later, Derek heard his wife cry for help. He rushed into the kitchen to find Aubrey squirming but making no sounds. It was obvious to Derek what was happening—his daughter was choking.

Fortunately, Derek remembered the CPR training he had received at the Bristol facility. He grabbed Aubrey and positioned her on his arm to perform infant back blows. After two or three blows, the food flew out onto the floor and Aubrey began to cry loudly.

His CPR training had worked, and Derek saved his daughter’s life. “I didn’t even think about it, the training was fresh in my mind,” Derek said. “The panic came afterwards when I stepped back to realize what had happened.”

When he returned to work, Derek shared his story with his colleagues and, in particular, thanked Control Room Operator Mike Tallon (the Red Cross Instructor who conducts CPR and first aid classes at the Bristol facility) and Toby Trebilcock, safety coordinator at Covanta Bristol, for the training he had received.

All Covanta employees receive training on many topics each year. Some topics cover scenarios employees face on the job every day while others extend to their personal lives, which we hope they never to have to use. Fortunately, Derek had the knowledge he needed when confronted with a life-threatening situation. 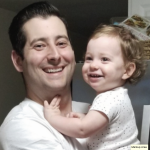